Well it has been a long while. School took longer than expected and life in general just got in the way of finishing school. But I am all graduated now, moved 20 miles from where I was living previously, and now have a new laptop(since my previous one which had been in and out of Geek Squad more times than I can keep track of finally died to where they refused to fix it and they FINALLY replaced the damn thing). Thank goodness for black-tie protection YAY!

So onto the first time consuming mani I have done in months. And in theme with my blogs name, meet my zombie themed nails. 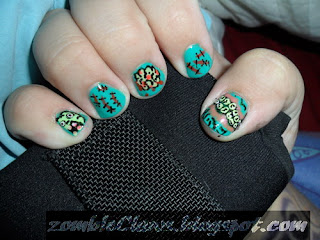 Since I cant exactly photograph both of my hands at once here is the other hand. I mirrored the design sort of... well just put the same image on both fingers. All of this was done free hand with dotting tools, brushes and the nail art pen. 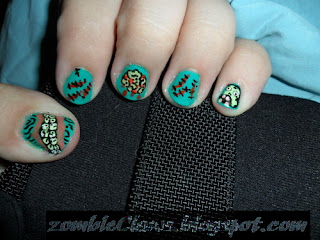 Hope you all have been well. I have a bunch of ideas in my art book I am itching to share once I get them out on my nails to stick around.