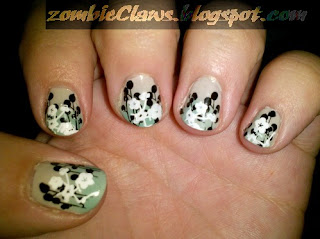 I still have tea on the brain. Can't help myself. The stuff is so good and tasty. As I was brewing a pot of Mandarin Orange Green Saturday night I was just staring  at the box lost in thought, when I suddenly got the "ah-ha hey wonder if" idea again. So while the coffee pot was still doing it drip thing I grabbed my book of stamping plates. I didn't have what I was looking for, but came up with this. I could have sworn I had Konad plate m66, but sad day I fear it was only on my wish list. So this mani was born in place of what came to mind. I fear a shopping bug bit me after realizing my lack of said plate though... but that will be fruit of a post in the future. Lucky for you, sad for my pocket book. 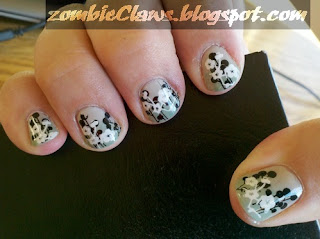 To get the faded green into grey, I used a makeup sponge and sponged Mermaid's Tears half way up each nail. I focused more color on the tips and did lighter pressing as I went up. The stamping makes it so you can't really see where the two colors end and begin, but the sponging also comes into play so there isn't a harsh noticeable line.

Did you notice I said I got inspired Saturday night... yea didn't actually do my nails until Sunday since I got so lost in shopping that I was staring, or shall I admit to drooling over nail plates and such that I was on the computer for over 2 hours straight before I hit the submit button to order. Left no time for polishing. Sunday was however very boring sitting at the inlaw's house since my car had to be worked on. I was smart enough to bring my supplies with me. 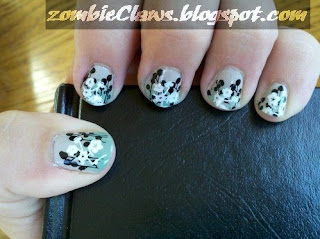 If you have the bundle monster plates, and know which design I used, then you know I was not able to achieve this look with just one stamping of it on each nail. Most of my nails have two or three stampings of the image to get it all the way across each digit. Only one stamping of the faux-nad was used. I have to say I usually stay away from my china made faux-nad plates for the reasoning that the plates are so deep, the images tend to  blur/ bleed and not look clean. I did a few test runs on my mixing palette with the polish before I went to my nails. I found that if I let the faux-nad design dry for about 10 seconds after picking it up off the plate and then pressing it the surface to be stamped, it transferred much more smoothly with fewer blowouts of the image. If you have any of these deeply etched plates I would love to hear what you have done to make stamping work better them. I have had such a hard time with them that I ignore them. I spent the money and don't want to just throw them away.