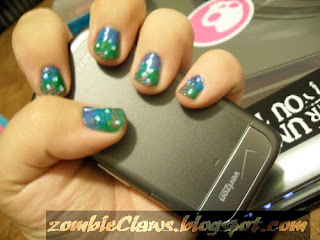 As semi-promised (though mostly stated), I have started going thru my stack of Lisa Frank stickers looking for inspiration. This look is from the shark stickers (see below). I have no idea if the shark had a name ever, but I took the zebra print from the backround behind the stickers and the various bubbles from the water. 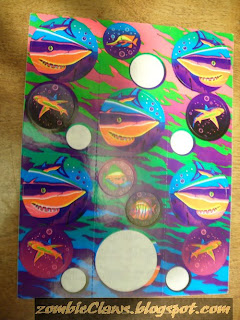 Now to be completely honest, I am not 100% sold on this mani. It feels very cluttered to me, so I am thinking back to the drawing board to find a better way to represent the Zebra Shark. For a first try its not bad. I am really thinking true bubbles next time and lighter cream polishes for the two tone transition behind the zebra print.
But, for anyone who may be interested in what I did on this first try here we go. First I took OPI Ogre-the-top Blue and uncarefully laid it on the bottom half of my nails. 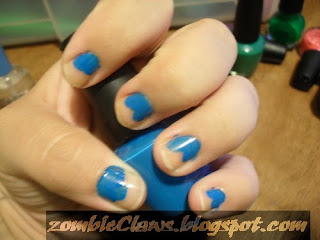 Next I took OPI Jade is the new Black and uncarefully laid it on the other half of the nail creating a two tone effect. I actually like my nails how they are here alone before I added the other elements. I think I might do this again at some point and stipple a lighter inbetween shade along the center. 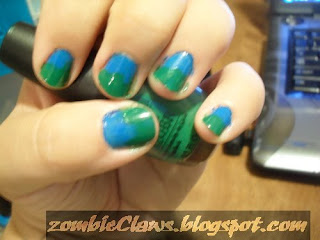 Once the blue and green were completely dry, I took my Konad plate m57 and used pastel pink, violet purple and green from konad to make the zebra stripes. After I laid down a coat of Seche Vite top coat. Then I took a tooth pick and placed the dots with white and konad pastel blue. I more than likely would have done another coat of top coat, but I just wasnt feeling the design and took everything off the next day. I tried this almost a week ago... this weekend I plan on trying another idea for this sticker look. Either way I will post my findings.
at Tuesday, August 31, 2010